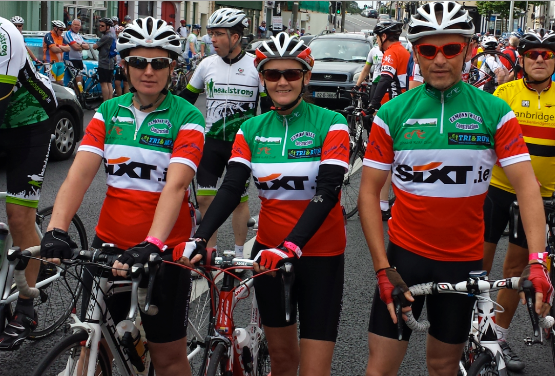 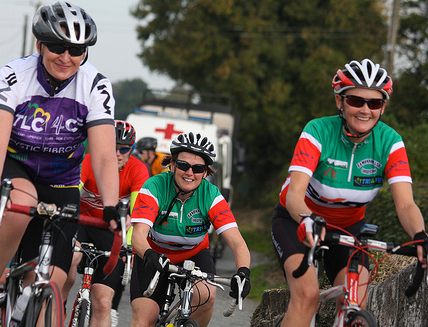 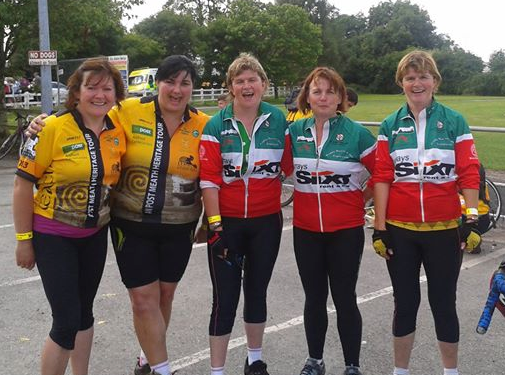 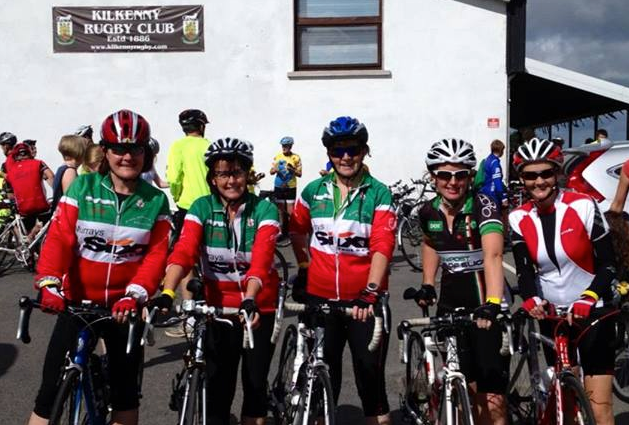 
On this page we will keep you up to date on the latest news reports from Sportive events which we take part in all around the country, right throughout the 2014 season.


A link to the CI Website, listing all the 2014 Sportives can be found HERE

An alternative site, independent of Cycling Ireland, listing sportives and other charity cycles etc can be found HERE


One of the three 'big' ones for the year, the Orwell Randonnee took place on the May Bank Holiday Saturday.  Limited to 300 entries it fills up very fast every year - some say it is for the Wine and famous Carrot Cake at the foodstop (yes, you read correctly!), others say it's for the challenge? We know the truth :)

This sportive takes in some of the toughest terrain that Wicklow has to offer - at 140km long, it's not for the feint hearted, but still...everyone that takes part really enjoys themselves, and the event is one of the best run in the country.
The event is sometimes unofficially referred to as the 'Wicklow 200 but without the flat bits'!!

The route this year was changed to add in a bit of variety - out went the infamous Shay Elliot and 'The Wall', and instead we were treated to the stunning climb of Glenmanass and Sally Gap (twice), not to mention round the back of the Blessington Lakes and the up over Wicklow Gap. 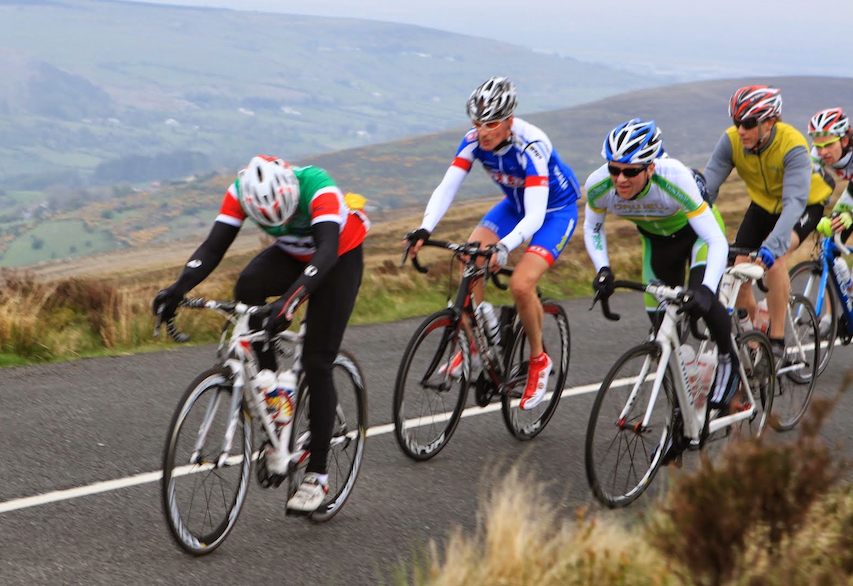 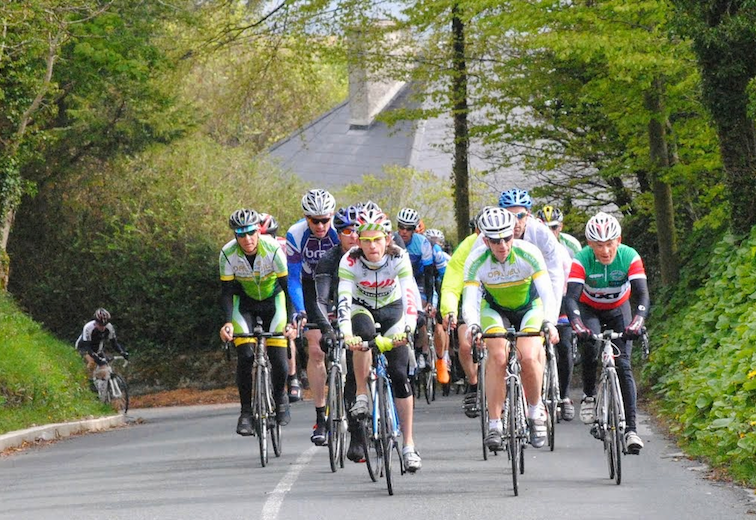 Almost no time to 'warm up' as it were....straight from the controlled rollout through a billion sets of traffic lights for the first 5k, we were treated to the first climb up to Johnny Fox's pup, swiftly followed by the unclassified climb over to the View Point atop of the Hellfire Climb, and continued to rise then over the featherbeds before a short (headwind) descent and then straight up to Sally Gap for the first time - seemed like every road in Wicklow goes UP!!! 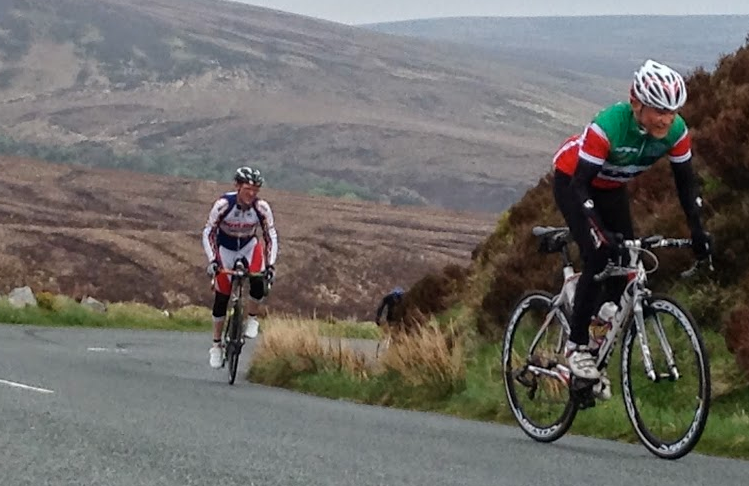 The foodstop in Laragh, after Wicklow Gap, was something to behold - only problem was not stuffing our faces before the second half of the day!!

The was a very very strong front group leading round the course, so staying with these 'racing lads' was not at all easy (in fact, I had to jump out ahead of them by 2mins from the foodstop to get half a chance of staying with them over Glenmacnass!!).

Caught, but not passed :), I hung in with the group to the finish - savage day out! Would recommend this one to anyone, even with all the climbing and the distance....well worth taking part, especially with the Chipper Van at the finish and your free Burger/Chips/Drink!! ye-haa! 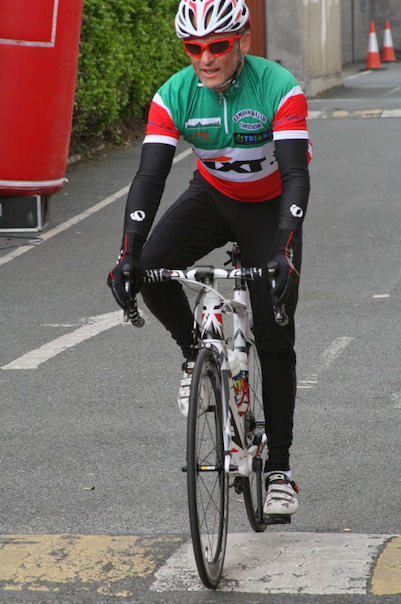 Next up is one of the other 3 'big' events which takes place on Saturday 17th May in Enniscorthy: The Mt Leinster Challenge.


With the Racing Teams in action all weekend in the Shay Elliot and Waller Cup races, meanwhile in the supposedly more 'leisurely' end of the sport, Andy Flood represented the club in the annual Burren Coastal Challenge in Ennis Co.Clare.  This year saw a new route, and the distance extended to 135km around the stunning Burren coast - with the weather staying fine for the whole day, the scenery was breathtaking.

While we say 'leisurely' end of the sport, of course these events have long since become that bit more competitive than the days of touring around Wicklow etc with a bag of sandwiches on the back of a carrier!!  for example, here is just a snippet of 35km during the Burren sportive, with the 5km split times showing the average speed in the rightmost column... 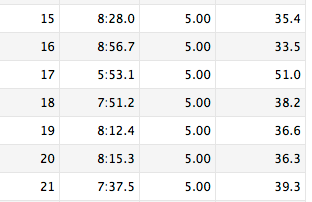 Hopefully we will have some photos from the event here shortly, assuming the photographers were able to focus on the lead group with such a high speed!!


Our good friends in Team 905 Edenderry held their first event this Easter weekend - and boy did they do a great job!  They even arranged a fantastic sunny warm day to make it all the more enjoyable too!!

Well over 200 riders signed on to take part in the inaugural Pat Jones Memorial Cycle, which took the somewhat unorthodox step of having laps of a 40km circuit instead of the usual 100km+ loops that sportive riders would be more used to - turns out the format worked really well because participants were able to bow out after two laps if they fancied taking a rest (and couldn't resist the lure of the chipper van when they pulled on for the foodstop! :) )

Clonard Road Club had a few riders taking part in the event - just two brave souls signed up for the 120k, but half a dozen or so in the 40km event... 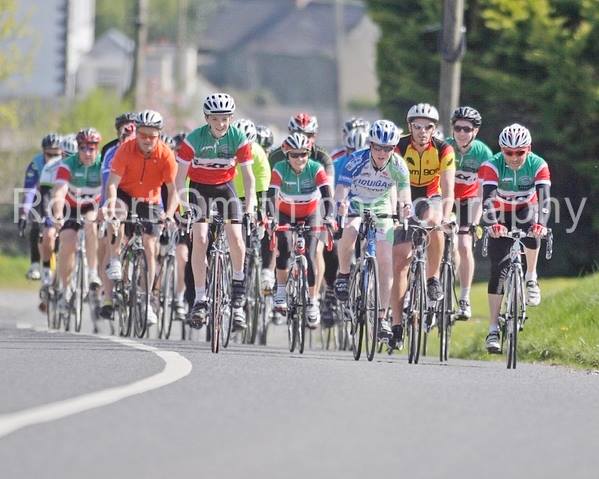 The weather stayed fine right through the whole event, and made for a very enjoyable day for everyone involved.

The course was fairly flat, so average speeds were quite high - as you can tell here from the faces below with lead-out specialist Tommy giving it loads here on the 120k route: 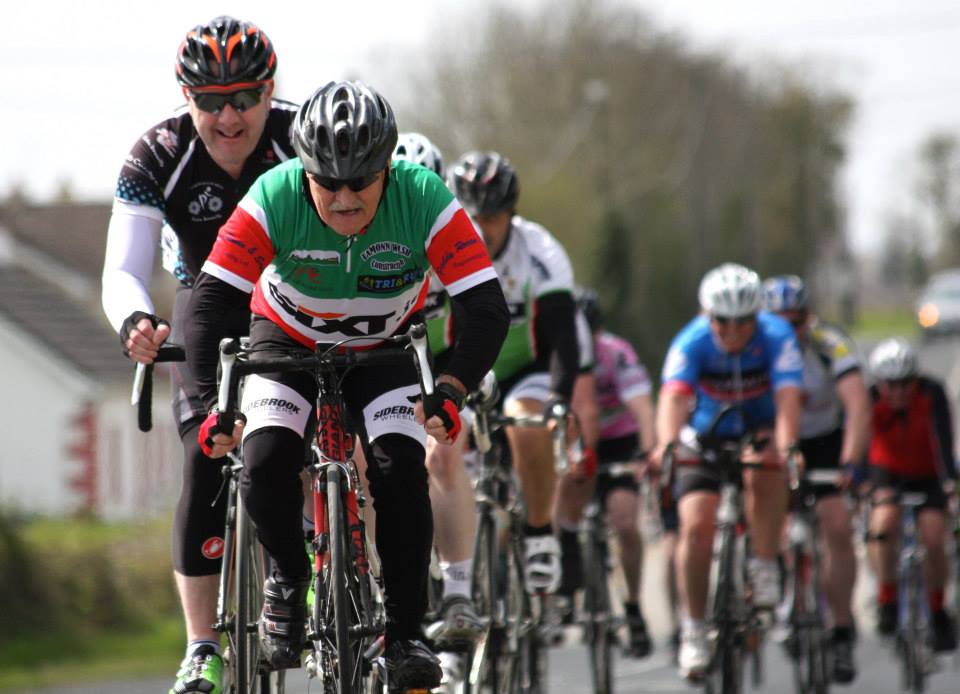 Back then at the finish, there was some great live music laid on by a young local band, a DJ also, and great food too!

Well done to Team 905 - everything ran really smoothly, and it was like the event had been established for many years, rather than being the club's first big event.

Next major event is the An Post Tour of Sligo which takes place on May Bank Holiday weekend - hope the weather is as good as we got for the Easter weekend!!!


With two challenging routes to choose from around the stunning Blessington Lakes and Wicklow hills, this event ranks among the top sportives in the country.  A massive 450 riders turned up to take part in this years event, raising thousands of euros in the process for the KARE foundation.
Clonard Road Club were represented by the usual sportive 'regulars', Sandra McCann and Lisa Nelson in the 67k event, and Andy Flood in the 120k. 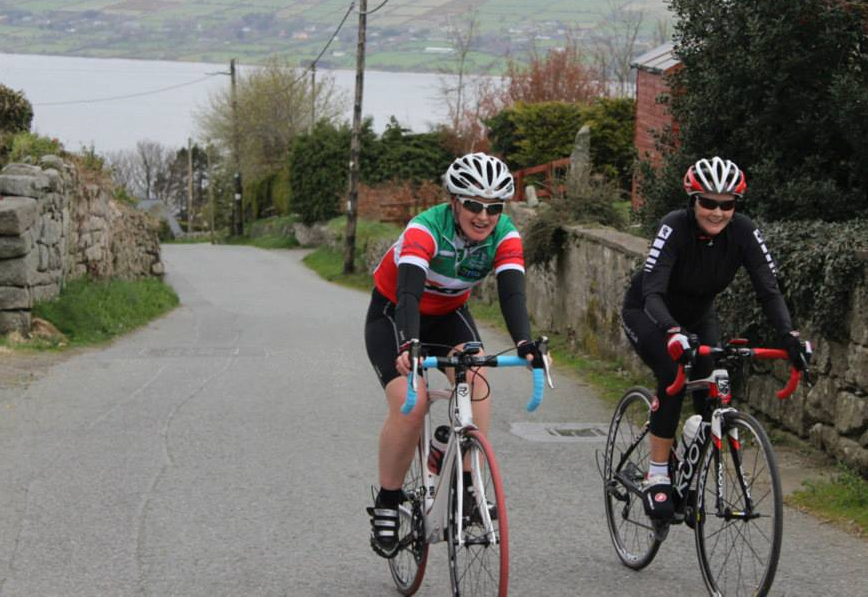 The weather stayed dry for the entire event, and made for a perfect day on the bike - cool enough but not too cold!  The atmosphere was great right from the start, with a DJ on site and stands from local shops and Eurocycles on-hand to give some help to anyone who had last minutes adjustments before the start.
The Garda escort out of Naas, with sirens on and blue lights flashing made for a safe passage through Naas, and all 450 riders rolling out in one large peleton.

The speed soon picked up on the tough run over to Blessington, and by the time the lead group for the 120k had reached the 'back of the lakes' as it's affectionately known, there were only around 15 riders left.  Speeds were quite high with the average at about 35km/h before the first set of hills through Lacken and Ballyknocken - 33km/h by the time we hit the main N81 after Hollywood climb!!

The foodstops in Donard (for the 120k) and Valleymount (for the 67k) were first class - everyone getting a good feed and ready to tackle the second part of their respective spins.

Next up, weather permitting, is the R905 sportive for Autisim Ireland next weekend - 40k or 120k routes available. All starting from Edenderry at 10am on Easter Saturday.


What is it with the winds recently?  South-East winds according to Met Eireann, and here we are on a fundraiser for the inland Lifeboats RNLI, with a circular course around Lough Ree....however we never felt the benefits of any tailwind for the entire lap! Mind you, we didn't see the lake either!

The organisers took the wise step to have two groups rolling out from Athlone - rolling out in lovely warm sunshine, clear blue skies, but the threat of rain was always there as it passed close by between Westmeath and Dublin.  Lucky for everyone (especially those of us who couldn't take another spin with winter gear on, and decided to go with the lighter gear!) we had a 100% rain-free spin! 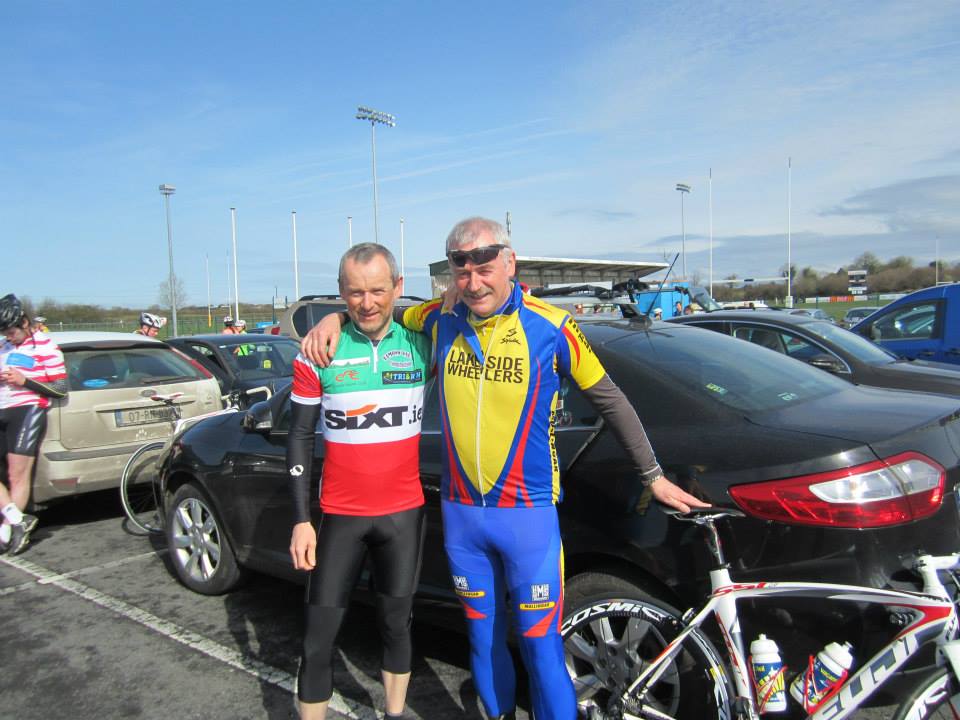 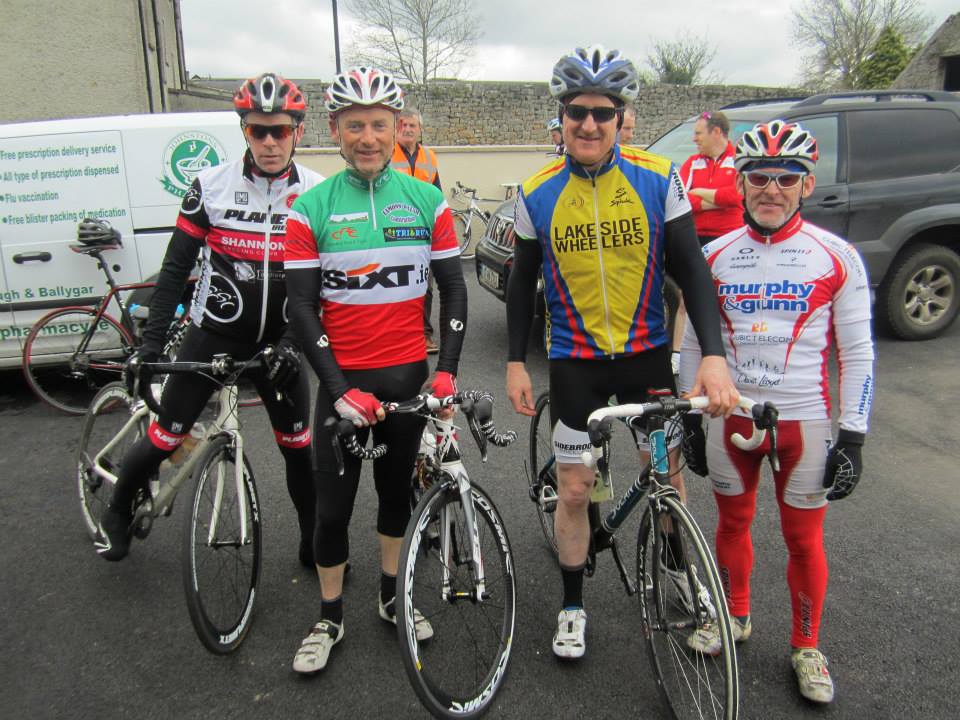 The pace was very high with the first group, keeping a steady average of 34km/h the whole way up the N55 Roscommon Road.

We headed right then, over to Lanesboro, where the RNLI pulled out all the stops to provide everyone with a super foodstop! Worthy of a photograph if only I hadn't left my phone in the car!
Belly's full, and away off with a group of 10, including a few of the Sidebrook guys - everyone sharing the pace at the front, all the way back through Ballymahon and on in to Athlone for the finish back at the Rugby Club, with more food and live music in the bar for us.
Nice mild weather all day - back in 2h30m with a nice average speed for the spin at 33km/h. Doesn't get much better!
Next on the [weather permitting] calendar is the 3-Peaks challenge in Wicklow, next weekend.  Time for some hills!!


Castlepollard would be well known to everyone for the hilly nature of the area, and the local GAA Clubs' fundraising cycle didn't let us down with regard to the challenging courses for both the 40km and 100km courses.

With a tough NW Wind giving practically zero tailwind (bar a few minutes here and there), the day was quite tough to say the least.

Lisa and Sandra represented the club in the 40km spin, and came in with 24km/h average speed which was very respectable given that all the participants had split up prety much right from the gun, so there was no peleton to shelter in.
Finishing in the top 3, with literally hill after hill for the entire course was a great show for the girls.  Tough winds and hailstorms didn't deter the girls from working their way through to have the lead riders in sight, right up to the finish.

Meanwhile, dodging the rain/hail showers in the 100km event, Andy Flood represented the club, and rolled out with the fast group.  The testing course meant the group was thinning out as the KM's went by - especially on the run over from Kells to Virginia which was directly into the headwind.  Up-and-overs were very quickly arranged among the group, which kept the speed up, despite the savage headwind.  The pace stayed very high with some local riders using the spin as race training, and after that stretch of road was completed the lead group were down to just 8 riders with the pressure of the high pace being set.
The fast pace continued right to the end, with just 6 riders left in the lead group coming through C'pollard to the finish in the Community School.
Average speed for the 103km spin was 33km/h which may not sound very fast, but with the wind direction on the day, and the hilly nature of the course, this was one tough spin!  I've had easier races!!!

Use the drop box to view a list of all news items.